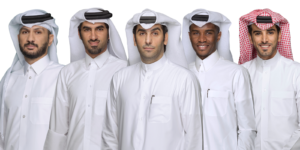 Qatar Players Association Board of Directors held an emergency meeting over Algharafa Football Club players strike and to discuss the overdue payments of the professional players in the league.

Mr. Al-Kuwari added that Algharafa’s players exercised their right to express their objection to the constant delay of payment. In addition, Mr. Al-Kuwari expressed Qatar Players Association full support of Algharafa’s players and indicated that the State of Qatar has amended its labour laws to ensure that employees are paid on time. Therefore, Mr. Al-Kuwari urged the clubs to comply with the State laws because the players are employees as per the definition of the law.

Mr. Al-Kuwari concluded his statement by indicating that QPA’s President, Mr. Salman A. Al-Ansari, has met with H.E. Sheikh Hamad Bin Khalifa Al-Thani, QFA’s President and requested his official intervention with the Ministry of Culture and Sports to support QPA’s position in resolving the outstanding payments of Algharafa’s players and the other clubs.