A delegation headed by Mr. Abdulrahman Al-Kuwari, QPA’s Vice President, along with the presence of Mr. Ibrahim Al-Ghanim, a Member of QPA’s Board, attended FIFPro’s Congress in Rome, Italy in which QPA’s official membership at FIFPro was officially received. 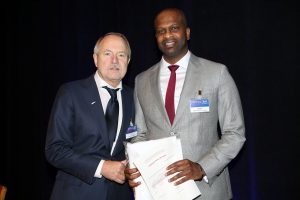 Mr. Salman Al-Ansari, the President of QPA, said “We are proud to have seen our beloved country’s name and flag added alongside those of all FIFPro’s members, and particularly proud to be the first country in the GCC to join this esteemed international organization”. He added “with this, QPA has achieved one of its most important objectives, which will support the football environment in general and further grow the QPA.”

Mr. Abdulrahman Al-Kuwari, QPA’s Vice President, said “We have worked for the past two years with FIFPro to ensure that all requirements and standards are met, and we are happy to say that today Qatar receives the result of that work”. Mr. Al-Kuwari added “we look forward to working with FIFPro to enhance our operations.”

Mr. Ibrahim Al-Ghanim, Board Member of QPA, said “The recognition of the international community is a result of hard work by the QPA and the membership will have a positive impact on our members and our performance.”