Qatar11 is an annual award from the players for the players, where Qatar Players Association invites all professional footballers to choose the best eleven players who constitute the best team of the season.

This award was designed based on FIFA FIFPRO WORLS XI in which all professional footballers around the world vote to choose the best team of the year. This recognition is considered unique because its by the players where they would vote for a goalkeeper, four defenders, four midfielders and two strikers.

Qatar Players Association seeks to enhance the sport spirit and solidarity through Qatar 11 awards and it hosted its first edition in 2018. 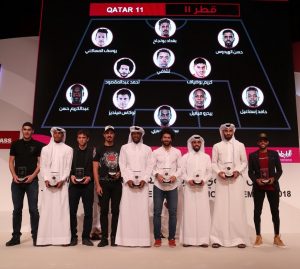 The voting procedure commences a month prior Qatar11 awards ceremony through which the players would choose the best using prearranged forms as follows:

By the end of the voting process, Qatar Players Association would announce a shortlist of the three names of each position who collected the most votes and will announce the winner during the ceremony of Qatar11.